Four-lens anastigmat. Coated optics. Equipped with an iris diaphragm. Designed for shooting distant and hard-to-reach objects, for reporter shooting from long distances, as well as a portrait lens. In addition to the options for connecting threads M39 × 1 / 45.2 and M42 × 1 / 45.5, there was also a version with a transitional frame for television cameras – Jupiter-21T (YUK-200T, late 1950s) and a special version of YK- 200K (start of development: 1969). Diagram of the Soviet lens Jupiter-21M

Consists of 4 elements in 3 groups. The optical scheme was developed in 1957, type – four-lens anastigmat. The early version of the lens was called “Jupiter-21A” and, according to many user reviews, had the best sharpness characteristics. Lenses “Jupiter” on the portal The first thing that catches your eye is its size. And weight. And a lens hood. Metal, retractable. The hood hides in the case, while it sits loosely in it, and pops out with a slight shake. The weight of the lens is on the order of a kilogram, the body has the shape of a tube tapering to the mount connector.

The focusing ring occupies a large area of ​​the body, the ring travel is about 270 degrees, the travel is smooth. The rings are factory-formed for easy handling. The faces are triangular, seven faces per section. Wearing gloves, this solution is not satisfactory. With prolonged use with bare hands, it interferes somewhat: fingers get tired of deep working out of edges. The depth of field at the open aperture value of the Jupiter-21M 4/200 lens is very thin, so it is very problematic to focus on focus without having a “live image” mode in the camera or a screen with micro-wedges and raster in the optical viewfinder. The minimum focusing distance is 1.8 meters. The diaphragm is 8-blade, through the lilac coating of the objective lenses, the mechanism for driving the diaphragm blades is visible. This modification is equipped with a jumping (blinking) diaphragm, the manual and automatic mode switch has a large area, and the mechanism drive rod protrudes from the inside of the threaded mount. The diaphragm can be adjusted effortlessly by the ring following the focusing ring. Built-in fixation of aperture value selection. The fixation is rough, the meaning cannot be knocked down without some effort. There is no aperture preset, the decision is due to the presence of a “jumping” mechanism. The diaphragm is manually adjustable with the diaphragm drive switch in the “M” position. In “A” mode, the aperture will not close without acting on the pin of the lens drive mechanism. It is produced by the focusing ring, and the depth of field is adjusted by manually setting the aperture, with direct observation through the viewfinder. During processing, a slight distortion of color rendition is noticed, which I call in a simple way: the warm lampiness of old photos. We can say that the lens, like most old Soviet (and not only) glasses, “has a built-in light filter.” A bigger problem is the disease of intolerance to back and side light – the drop in contrast is pronounced, although it is removed in most cases, without problems, in graphic editors, or by cropping the light before releasing the shutter. According to the classics of Soviet lens building, Jupiter-21M draws halos on contrasting transitions. Lost at f / 5.6. Of course, the optics of old schemes will bother owners of full-frame cameras with vignetting at the corners of the frame at an open aperture. However, an experienced photographer will be able to remove the vignette during post-processing in the same Lightroom or Photoshop. On a cropped camera, this vignetting effect, as such, was not observed.

The sharpness is considered satisfactory for use on cameras with a large pixel size. On more modern ones with high density, there may be problems in the form of soap and shake. Metering the exposure of the Canon EOS 300D does not go crazy with this lens, the correction is minimal, and is solved by shifting upward by a third of a stop. The lens can be used with the M42 K-1 2x converter. At the same time, the resolution of the optics of the lens is sufficient to provide high-quality image transmission to the matrices of modern DSLRs. I used the K-1 converter to take this photo of the Moon. It worked out pretty well considering it’s taken off hand. When using this lens at this focal length to shoot the moon, you can see hot air currents in the frame. The moon, as the brightest object in the frame, is framed by a purple halo of chromatic aberration without processing. However, when you stop down to f / 8, this is removed. But it doesn’t add to the convenience of handling the lens.

Steel body, matt black painted. The focusing distance and aperture position are in yellow and white, respectively; on engraving. DOF scale – green. Surprisingly, on this lens, the focusing distance markings do not differ from the real ones. “Overflights” and “undershoots” at extreme values ​​were not noticed. The lens kit includes a box, a leatherette tube, an instruction manual and the lens itself with covers.

Use on digital cameras

The easiest way to shoot is in Aperture Priority (Av) mode, when the camera adjusts the required shutter speed based on the current aperture value and the light in the frame. To work on digital cameras, you need an adapter from the M42x1 threaded connection to your camera. Jupiter-21M is easiest to install on Canon EOS with EF (-s) mount, because of the insignificant difference in focal lengths. Adapters without focus confirmation chips on Canon are cheap.

I liked working with Jupiter-21M. Soft in focus, precise switching between aperture values. The picture is good, and even catching the light in the frame, the result was pleasing – together with the “automatic toning” of the photos, we got warm lamp frames. I hope you enjoy the Jupiter-21M review. Do you have any experience or feedback about Jupiter-21M? Please in the comments. 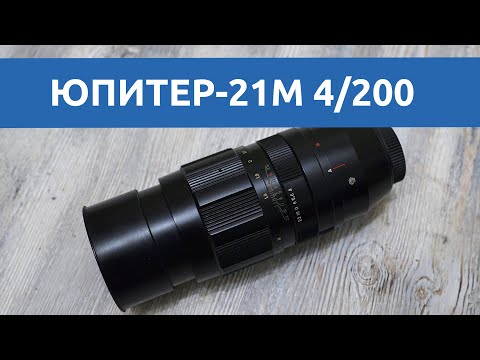